Create an Account - Increase your productivity, customize your experience, and engage in information you care about.

A thirteen year veteran of the St. Charles Parish Sheriff's Department, Deputy Nelson Coleman, 70, suffered a heart attack on November 5, 1982. While attempting to subdue a suspect wanted on a felony warrant the deputy and suspect became embroiled in a scuffle. During the struggle, Deputy Coleman experienced severe chest pain and died. 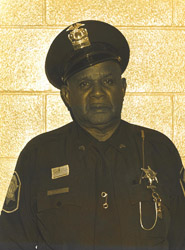